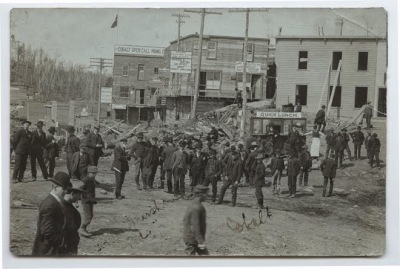 Barber’s Open Call Mining Exchange was in the heart of Cobalt’s commercial district, “The Square.” All were welcome to join, as long as they could afford the $50 membership fee.

The building was located on Argentite Street, opposite to where the Golden Age Club is located today.

By the end of 1906, Barber had moved on to new territory. He had quit the exchange business and focused instead on his stock brokerage. He promoted the sale of shares in wildcat mines.

What is a wildcat mine?

In a nutshell, a wildcat mine is a property that has the potential to be a producing mine, but exploration and development work has not yet been done to prove it.

These mines are questionable ventures which offer a quick and highly profitable return for the investor who doesn’t mind taking the risk. Many people are duped by the marketing propaganda and don’t realize that they are making a risky if not downright foolish investment.

Basically, two types of wildcat mines are promoted or “floated” by either unscrupulous or impatient promoters.

In Airy Somethings, we describe the Londonderry Mine, a wildcat gold mine in Australia during the late 1890s. It was a spectacular dud.

We also discuss in detail two of Barber’s pet projects. The Abitibi and Cobalt Mine was a supposed silver mine located near Gillies Depot. He said, “The stock I am pushing and that I firmly believe will be a money maker is the Abitibi & Cobalt Mining Co. – whose mines are right in the heart of the producers – in Coleman Township.” Barber hoped that his investors would take him at his word. In reality, his mine was far from the silver bearing region of Cobalt.

In Larder Lake, he promoted the Larder Lake Proprietary Gold Fields Mine. During the winter of 1907, about 4000 claims were staked – over snow. There was no way anyone knew for certain that their property had gold.

Based on the definition, every Larder Lake mine was a wildcat – there may have been potential, but no one had proved it. That didn’t stop brokers like Horatio Barber, though. He made out like the bandit that he was, while others lost their shirts.

It is ironic, if not tragic to note that if Barber and his partners had had the resources and technology required to dig deeper, they would have encountered rich ore bodies from which the Kerr Addison Mine later extracted over ten million ounces of gold.

Terry Grace from Amesbury and Maggie Wilson from Cobalt, in Northern Ontario have written a lively “warts and all” account of this most exceptional man, following him as he traveled extensively across the world. This illustrated book is for those with an interest in Northern Ontario heritage or aviation history in the UK.

AIRY SOMETHINGS: The Extraordinary Life of the Aviation Pioneer Horatio Barber by Terry Grace and Maggie Wilson. Available online and at local booksellers.

This site uses Akismet to reduce spam. Learn how your comment data is processed.