Horatio Barber had business partnerships with several men during his two years in Ontario. In Cobalt, he ran a stock exchange, and in Larder Lake, he established a branch office of his Toronto brokerage, Canada Mines.

In the first installment of the Co-Stars series, we featured Mr. Browne and Mr. Moore, two Cobalt men who came to the region to take advantage of business opportunities in the new frontier town.

Today, we feature a man who also took advantage, but not in a good way.

Anyone who has read the Cobalt history books will have encountered this person in name only. To date, the only pictorial evidence of the man was his building, the Hunter Block.

Joseph Hendricks Hunter was one of the directors of Barber’s Open Call Mining Exchange. In 1907, he was a Vice President of the City of Cobalt Mine. The press referred to him as a capitalist from Cincinnati who owned considerable property in Cobalt’s residential and commercial neighbourhoods. His most significant visible contribution to Cobalt was the building illustrated above. It was completed in 1907.

By mining-town standards, the Hunter Block was impressive. On the outside, that is. Inside was another matter. It was a cheaply built structure without toilets. In 1909 during the typhoid crisis, Joseph’s brother Cromwell Orrick acted as the landlord of the Hunter Block.

C.O. Hunter was fined for non-compliance after he ignored the health authorities’ order to install toilets in the building and other rooming “facilities” in town such as these so-called cottages. 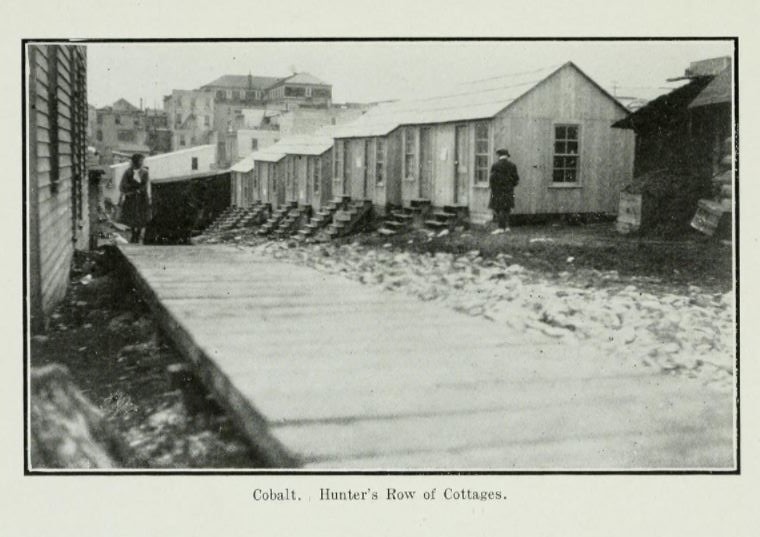 No heat, no running water, and next to no room. These shacks were hardly bigger than a garden shed. The buildings were singled out in a 1909 report by the Ontario Ministry of Health as being particularly noteworthy for the squalid conditions.

Mr. Hunter’s disregard for the well-being of his Cobalt tenants is no surprise when we consider his business dealings back in Cincinnati.

In 1893, when he was 36, J.H. got himself into hot water along with another man, J.H. Schaaf of the Franco-German Electro Company of Cincinnati. The Postmaster General raised the alarm when he noted an unusual volume of mail being sent to their company. Both men were arrested and charged with mail fraud. The details of their scheme were reported in the newspaper. [1]

Their plan involved a new fad – an electronic gizmo that could heal all manner of ailments. At that time, electrotherapy products—such as electric belts, socks, and hairbrushes — were all the rage because they were supposed to cure everything from cancer to headaches.

First, they needed a sales force. They placed ads in dozens of newspapers in the US and Canada.

Consider, for a moment, the wage on offer. $70 a month, plus expenses? If you adjust for inflation and convert to Canadian currency, they promised about $3,000 a month – a mighty attractive wage for unskilled labour.

There had to be a catch, right?

Of course there was a catch.

Roland Chapman was one of the hundreds who were taken in by the scam. During the trial, he testified that the continuous deluge of letters from Schaaf’s company finally wore him down. Times were tough and farming was hard work. Nothing ventured, nothing gained, Chapman “informed the electric company that he desired to become its agent at once.” He requested instructions as to how to proceed.

The instructions were not what he expected.

“He was informed that before entering its employ he must send $4.00 for two electric pads to be worn by the afflicted, and he must sell those pads and obtain testimonials as to their efficacy.” Fulfillment of those obligations would secure him a place on the company payroll.

Chapman complied. He sent away his $4.00 and received two “peculiarly constructed, insignificant-looking devices.”

Gamely, the new salesman canvassed door to door and made exactly zero sales.

He decided it was time to get legal advice. His lawyer instructed him to write up bogus testimonials and send them to Electro Company to learn what the next steps involved.

As suspected, the Franco-German Electro Co. was more than happy to sell him a supply of additional electrotherapy devices, provided Chapman paid in advance. “After a while, they would put him on salary.”

The lawyer’s advice to his client? Go back to farming.

Hunter was freed on $2,000 bail, an enormous sum paid by his brother Harry. But J.H. skipped town. So much for gratitude! The press proposed that Hunter was following the lead of another character also involved with the scam – someone who was known to be in Canada.

The newspapers had guessed correctly. By 1901, J.H. and his family were in Toronto where he worked in advertising. The 1911 census reports  his declaration that he immigrated here in 1893.

The Cincinnati Capitalist in Cobalt

Next, we find Mr. Hunter in Cobalt, Casey Township, and Charlton, involved in numerous townsite development projects and the occasional mining scheme. Horatio Barber partnered with Hunter in some of these ventures, and issued press releases to promote the developments.

In 1908, Hunter purchased lots of the Cochrane townsite at the end of the TN&O rail line. The press speculated that he might build another “Hunter Block.” This, as far as we know, did not happen.

By 1911, Hunter was a wealthy man and his family lived in a posh Toronto neighbourhood. It is interesting to note, however, that his name did not merit an entry in the Blue Book of Toronto’s high society. Surely an oversight? After all,  in 1911, Hunter’s daughter Bessie Lee married Russian nobility – Mr. Eleazer Eric Michael de Sherbinin, of Cobalt. He apparently owned a gold mine in the Porcupine.

Then again, maybe the editors of the Blue Book knew a fraud when they saw one.

It seems that by 1916 Joseph Hendricks Hunter had died because his wife was a widow when she lived in Detroit.

However, if you dabble in ancestry research long enough, you know that women chose the more socially acceptable way of removing themselves from difficult relationships by declaring themselves widowed rather than divorced or abandoned.

Speaking of divorce, by 1930, daughter Bessie had remarried and was living in Los Angeles with her second husband and her mother.  I’m sure there is plenty more to the de Sherbinin story, but that’s for another day.

Terry Grace from Amesbury and Maggie Wilson from Cobalt, in Northern Ontario have written a lively “warts and all” account of this most exceptional man, following him as he traveled extensively across the world. This illustrated book is for those with an interest in Northern Ontario heritage or aviation history in the UK.

AIRY SOMETHINGS: The Extraordinary Life of the Aviation Pioneer Horatio Barber by Terry Grace and Maggie Wilson. Available online and at local booksellers.

9 thoughts on “Horatio Barber and his Cobalt Co-Star J.H. Hunter”

This site uses Akismet to reduce spam. Learn how your comment data is processed.